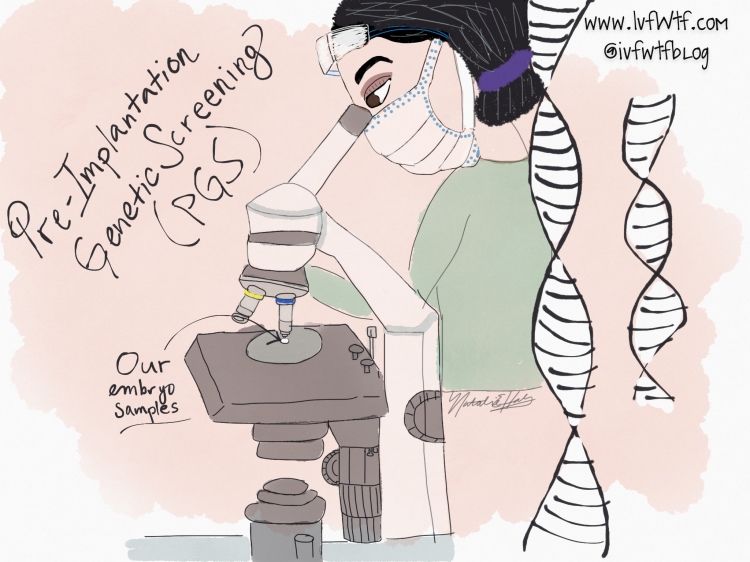 We decided to send our frozen embryos out for Pre-Implantation Genetic Screening (PGS) in order to improve our success rates. Boy, was I glad. I didn’t know this when we decided to have this done, but I needed the time to recover. There was no way that I could have ever done a fresh IVF transfer anyways, because I was so so sick. (You can read more about that here.)

We had 9 embryo samples to send to the lab. Ours happened to go through a genetic lab called CombiMatrix. We would have to wait a week or so before finding out the results. I felt super weird about this. If we were to get pregnant naturally, we wouldn’t have this option, but I wanted to know. I was scared that they would all have something wrong. It was hard to wait for so long for the results. We just held on to the fact that we had 9 chances right now.

I received a phone call from the billing department of CombiMatrix telling me that I owed them $2,500 before they could release any of the genetic testing information to us and our Reproductive Endocrinologist. I was so confused, because I was almost positive that we had already paid my RE for this to be done. I told her we already financed it through my RE and they should call them. The woman on the other end told me she had never heard of this. I got super worried. $2500!?! On top of everything we already had paid!? Holy shit. How would we pull that kind of money together!?

My RE called me personally the next day to explain that NO, WE DID NOT PAY FOR THIS SERVICE YET. WE PAID FOR A DIFFERENT SERVICE. We BOTH didn’t read the billing correctly. It was to be expected. We were exhausted and our minds had been all over the place. I got off the phone and had to tell my husband the bad news.

After the MASSIVE PAYMENT, the lab released the information to my RE. She called me and gave us the results: Two of our embryos were missing a chromosome. All of the 7 others were perfect! I felt sad about the two, but I was so glad we had this done. We now knew we would have healthy embryos transferred.

We were down to 7 solid super amazing and adorable and perfect frozen embryos!!!!!

Next, it was time to start planning for our first ever frozen embryo transfer!

More on that later.